The Russian Partition (sometimes called Russian Poland) constituted the former territories of the Polish–Lithuanian Commonwealth that were annexed by the Russian Empire in the course of late-18th-century Partitions of Poland.[1] The Russian acquisition encompassed the largest share of Poland's population, living on 463,200 km2 (178,800 sq mi) of land constituting the eastern and central territory of the previous commonwealth. The first partitioning led by imperial Russia took place in 1772; the next one in 1793, and the final one in 1795, resulting in Poland's elimination for the next 123 years.[2]

To both Russians and Poles, the term Russian Poland was not acceptable. To the Russians after partition, Poland ceased to exist, and their newly acquired territories were considered the long lost parts of Mother Russia.[3] To Poles, Poland was simply Polish, never Russian.[3] While the Russians used varying administrative names for their new territories (see below), another popular term, used in Poland and adopted by most other historiographies, was the Russian Partition.[1]

The Massacre of Praga (now a district of Warsaw), April 1794

Even before the partitions from the late 18th century, the Russian Empire had already acquired some territories of the Polish–Lithuanian Commonwealth (a real union of Kingdom of Poland with the Grand Duchy of Lithuania). The first Russian partition took place in the late 17th century when the forced Treaty of Andrusovo signed in 1667 granted Russia the Commonwealth's territory in the Western Ukraine.[3] Under the Third Partition of Poland Russia acquired Courland, all Lithuanian territory east of the Nieman River, and the remaining parts of Volhynian Ukraine. 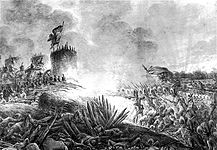 The Warsaw Uprising (1794), prior to the Russian massacre of civilians

Battle of Stoczek in 1831, part of November Uprising against the Russian imperial rule

Battle of Węgrów (1863), one of over 60 battles during the January Uprising

Major historical events of the Russian Partition included the Warsaw Uprising (1794) soon after Kościuszko's victory at Racławice. It ended up in the massacre of Praga district of Warsaw, in which the Russian imperial army killed up to 20,000 civilians in reprisal or revenge, regardless of gender and age.[4] "The whole of Praga was strewn with dead bodies, blood was flowing in streams" wrote Suvorov himself.[5]

In 1807, the victorious Napoleon formed the Duchy of Warsaw after his War of the Fourth Coalition against Prussia and Russia. The new Duchy was held in personal union by King Frederick Augustus I of Saxony. However, the Duchy was dissolved after just a few years following the 1815 Congress of Vienna, and all its territory returned to its previous rulers. The Tsarist Kingdom of Poland was established in the territory returned to Russia with the Tsar taking the title of King of Poland. The protectorate was gradually integrated into Russia over the course of the 19th century. Notwithstanding, the relentless Russian exploitation activities led to the Template:Nobreak November Uprising which took place in the heartland of partitioned Poland, forming a government. Its subsequent defeat resulted in a new wave of Tsarist mass repressions and punitive actions. In 1863–1864 another insurrection, the January Uprising, broke out. This time, the Carmelite friars who helped the insurgents were sent on death marches to Siberia chained by their necks together.[6] The January Uprising lead to the Kingdom's autonomy being drastically reduced, and its renaming as Vistula Land. There is debate as to whether the Kingdom of Poland, as a state, was formally replaced by the Vistula Land. Towns were stripped of their charters in reprisal and turned into villages. The Russian Partition of Poland was made an official province of the Russian Empire in 1867.[7][8]

In the early 20th century, a major part of the Russian Revolution of 1905 was the Revolution in the Kingdom of Poland (1905–1907). The return to Poland's independence was a result of the First World War on the Polish lands (1914–1918), the overthrow of the Tsarist regime, and the defeat of the Central Powers in 1918.[2]

1865 Death march of Polish captives to Siberia by Grottger

The Russification policies were harsh, and there were many repressions, particularly in the aftermath of the November Uprising (1830–1831) and later, the January Uprising of 1863–1864.[9] Many Poles were exiled to Siberia,[9] some 80,000 of them in 1864 in the single largest deportation action commenced by the empire.[10] Polish language was discriminated against, and it lost its official status. "Books were burned; churches destroyed; priests murdered;" wrote Norman Davies.[11] There was no education in the Polish language, and publications in Polish were few.[9] The only elementary schools were constantly underfinanced.[9] The city of Warsaw under the Tsarist rule resembled a military base with exclusively Russian stores and clubs as well as 12 Russian garrisons in the city,[12] equipped with newly built horse stables, and amenities like laundry shacks, and cabbage pickleries.[13]

Polish stores – where Russian was not being spoken – were routinely denied a license. Polish names were removed even from botanical signs. Hunger and poverty were rampant with record number of women forced to work at the Russian military brothels, of which there were some 185 in total, including 16 official ones (1884).[13] In cheap army brothels sex could be bought for as little as 30 kopecks (less than 1/3 of a rouble); one woman for every 30 Russians stationed at a garrison, with beatings and instances of women getting killed by them in drunken rages.[13] Sex slaves were obliged to drink with the clients as a general rule. Officers had their own brothels under the chief of police (1888–1895), known sex connoisseur Nikolai Kleigels (Template:Lang-ru) who was selling young Polish girls dressed in exotic costumes for 10 roubles a visit.[13] The girls were categorized by the Russian authorities as either inexpensive, medium-priced, or exclusive based on age, beauty and demeanour. In all cities with the Russian garrisons, army-licensed brothels were required to provide so-called "patriotic duty" to their regiments by giving one free visit per soldier, at least once a week. The battalions of 186 men each, divided into 9 companies, were taken to brothels under the command of an infantry sergeant. Each girl was required to service 20-21 members of a battalion, after which she would be allowed to take other men to make money in order to buy food.[14] Jewish girls were especially vulnerable due to the totality of the tsarist official antisemitism including mass expulsions of Litvaks commanded by Alexander III of Russia which led to desperation and hunger.[15]

There was nonetheless growth in the national consciousness, and the Revolution in the Kingdom of Poland (1905–1907) resulted in the general improvement of the situation soon before the dissolution of the Empire.[9] Some major political parties of the Second Polish Republic developed around that time in the Russian partition (ex. Polish Socialist Party).[9]

Ukrainians were officially considered "part of the Russian people" and at the time mostly referred to as Little Russians.[16] Since they were seen as Russians they were not discriminated against at the individual level and (if they could speak Russian) any career was open to them.[16] Nonetheless, in 1804 Ukrainian as a subject and language of instruction was banned from schools.[17] A following 1863 ban on Ukrainian books led to Alexander II's secret Ems Ukaz, which prohibited publication and importation of most Ukrainian-language books, public performances and lectures, and even banned the printing of Ukrainian texts accompanying musical scores.[18] Ukrainians living in Austria-Hungary were given more rights than Ukrainians living in the Russian Empire.[19]

The territories of the Russian Partition saw very moderate economic growth over time. No business activity could take place without bribing the Tsarist officials first.[13] Much of the output of the Polish Partition was exported to Russia proper, especially after the border between Congress Poland and Russia was abolished in 1851.[9] The emancipation reform of 1861 was a major step towards industrialization and urbanization.[9] Particularly, the last three or four decades before World War I saw significant economic development and urbanization.[9] However, in many areas of the economy, development stalled.[9]

The Russian Empire divided the former territories of the Commonwealth it obtained (Rech Pospolitaya in Russian) by creating or enlarging the following guberniyas (Tsarist governorates, or provinces).[20]

After the Congress of Vienna in 1815, the Russian Empire created a separate entity called Congress Poland out of some of the above governorates. See administrative division of Congress Poland for details. Territories in the Russian partition which were not incorporated into Congress Poland were officially known as the Western Krai, and in Poland as the taken lands (Template:Lang-pl).

The Western Krai comprised the following lands of the Commonwealth:

During World War I (1914–1918), many of the territories were occupied by the Central Powers (primarily, German Empire) and came to be administered by the Ober Ost.